I come to you to ask you a question, I tried to compare retroarch with snes9x to see if the rendering was identical

I realize that the 4: 3 format does not make the two the same with the same settings, how is that possible?

it looks the same if I put the 5: 4 aspect ratio on retroarch how is that possible?

Easy: they use different scaling code than we use. That is, their calculation may include other lines that aren’t included in the regular, visible image (which is all we use for our calculation).–for example, the SNES has an additional 8 lines at the top and 8 more at the bottom for a total of 16 lines of “overscan” that are cropped off before we do any calculation, and snes9x may be including these lines in their aspect ratio calculation–or they may just be doing a different calculation altogether and calling it “4:3” because it’s close enough to that familiar aspect. Dunno.

ok it seems clearer to me!

I’m mainly looking to play in conditions approaching a CRT monitor so I guess retroarch does better than snes9x at this point?

wellllll, that’s a (hilariously) contentious topic. I’m of the opinion that there is no one “correct” aspect ratio, as CRTs are analog devices and therefore have varying levels of overscan, as well as no real concept of horizontal resolution, so as long as you’re in the general ballpark and it looks right to you, you’re as “correct” as anyone. (pay no attention to the “circles are round!!” crew; in-game artwork is a poor and inconsistent guide)

Other people, however, are of the opinion (and they’ll tell you it’s not a matter of opinion but fact!) that there is One True Aspect Ratio that’s based on a calculation derived by the console’s native dot clock multiplied by the horizontal resolution including horizontal overscan minus the square root of the velocity of a load-bearing swallow (last part added just to poke fun, in case it wasn’t obvious). To these folks, 4:3 and 8:7 are as incorrect as 1:1, 16:9 or 200:14.

Now, to be clear, I think these people with their dot-clock-based calculations are as right as anyone else (but not moreso!), and if it makes them feel better to do a bunch of math to justify their choice, more power to them, but this is a mythical, nominal aspect ratio that they propose (and changes with each video mode, among which many consoles switched frequently), which does not reflect what anyone actually saw on their display beyond random chance.

tl;dr: go with what looks right to you.

you can’t make it clearer as an explanation haha

Thank you again for your clear and precise explanations

Oh a bit unnecessary after all this time, no? I have photos of me playing Yoshi’s Island and it shows the stretched aspect of the game. Once you are done with the nostalgia factor you can start applying xbr filters to your pixels, use hacks to widescreen Sonic The Hedgehog, or assume pixel artists were not masochist enough to draw ovals instead of perfect circles. There’s an audience for everything and I don’t go around saying that interpolation filters is a sacrilege just because I don’t like it. Here’s OP formatted correctly in PDF.

Aside from that I’m not sure what snes9x core is doing but I think it should be unified with the rest of cores and crop borders if in settings is said so and apply 4:3 DAR according to the rest of cores.

Ha, I’m sorry, I didn’t mean those (lighthearted) jabs at you specifically, though by linking to your thread, I can see how it could come across that way. But no, I’ve recently had discussions with some other people who have been quite insistent that there is one way to play and everyone else is doing it wrong. I feel like you and I have a mutual understanding about the topic and I don’t mean to undercut that.

It seems the dot-clock-based method is making the rounds again, but I can’t tell if it’s an “everything old is new again” sort of thing or if the new wave of proponents came to their same conclusions independently. In either event, aspect ratio discussions continue to be amusingly divisive.

Another issue is that not every CRT was 4:3 anyway, some were squarer/rounder and some were wider and many were convex therefore bent the image also. With effectively no horizontal resolution, this just meant everything scaled to the edges anyway (unless adjusted on set), so there really is no right/wrong, it’s whatever looks closest to what you remember.

It’s a bit like vinyl purists arguing against CD’s, but forgetting that vinyl came in different sizes/speeds and not everyone had a high-end stylus arm or turntable to play them.

The so called dot-clock-method is what makes most sense to me and also what looks most natural. Plain 4:3 always looked too wide to me.

After reading Dogway’s article and doing the calculations, everything made sense. 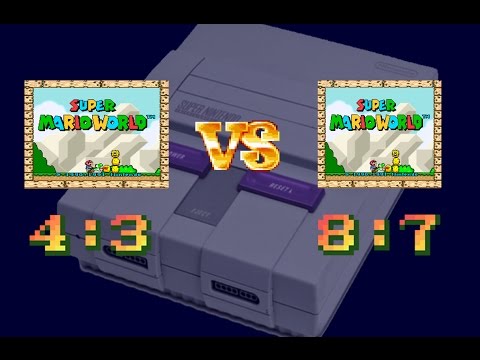 Console provided aspect ratios should at least be in the ballpark, because they are generally maintained better compared to some computer cores, which suffer from some underdevelopment. E.g the MSX and Atari cores need substantial aspect adjustments, even more so because they didn’t differentiate between PAL and NTSC ratios the last time I tried them.