Crt monitor, what can I expect?

Might as well drop some pics I took some time ago from my 15": Usually, the mask is way more prominent than scanlines, but they’re a bit better to see in this shot: 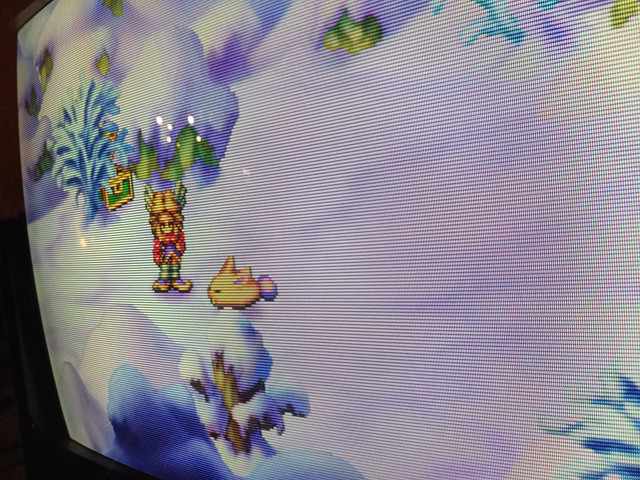 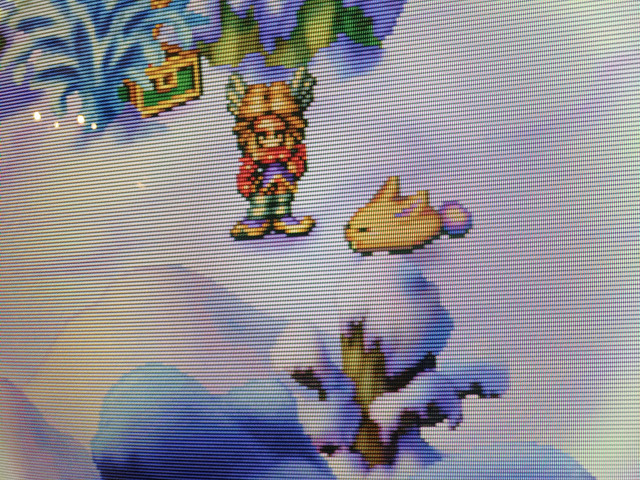 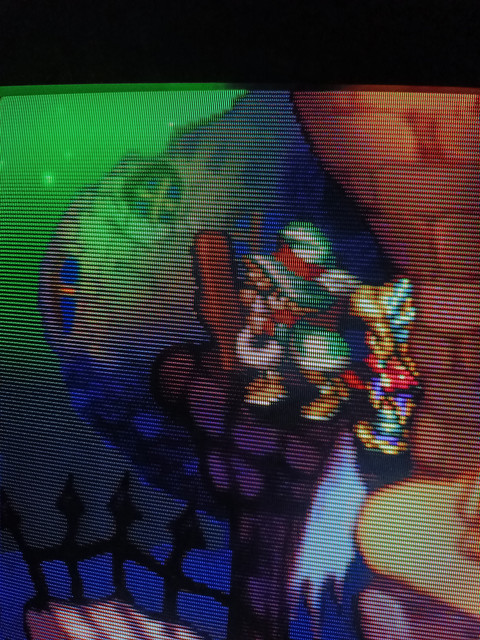 Going to get rid of my 17" VGA monitor. Instead, I got a CRT TV of about the same size, one I indirectly mentioned in the composite thread: Blaupunkt PM45-15 VT (Grundig chassis, Philips tube, from around 1995). Big portables seem to went out of fashion as time went on (at least in Europe), the 14" inch ones are all over the place. Somebody was giving this unit away for free but still was willing to ship it, so I only had to pay for that.

Testing the composite input I was kinda shocked, contrast, brightness and blur were making it look like a mess. I didn’t have a remote yet, so no adjustments possible at first. The RGB connection looked considerable better, through software (shader) adjustments) it basically suggested that it was still usable. Very soft, but there were still noticable scanlines. Somewhat “paint” like. Interesting look, but for an RGB picture a bit too much lacking in crispness imho. I went ahead and got a remote, watched some videos and read about adjustments through the internal FOCUS and SCREEN knobs. (and CRT safety. these adjustments are relatively trivial, but working with the internals is still dangerous.). After doing these adjustments things became much better, composite was also fixed. Encouraged by this I also opened up my Telefunken which is about 20-21" in size, but didn’t show any scanlines except in very dark areas. My crappy phone camera can’t quite convey it, but here are older photos: Not quite as blurry in reality, but it looked somewhat dull. After opening it up and adjustments, also notably better. I absolutely love those metal slug shots man! I been trying to find a crt shader that looks like that, if it exists that is haha

If you take that shot and resize to 1080/1440p level with a lanczos filter, it’s almost the same pattern with lottes 1 (but lottes 1 subpixel RGB is wrong for LCDs, it creates a Magenta Green pattern with an offset, instead of R-G-B so in the end it doesn’t look anywhere near this). Of course you would need a 4K/8K to have all the details.

I’d love to try and recreate those screens in a shader. If you have any time and the desire could you follow the first post here?

As CRT’s are getting older and no new ones are being made, we are left facing a future of these fantastic displays dying out. As people on this forum well know, one avenue to help alleviate this issue is to reproduce them in the digital form. In order to do that we really need close up standardised shots of the CRTs that are still working. This is a call out to everybody who owns a CRT to post photo’s of their displays here so that we can attempt to reproduce them for the future. Instruction…

I have a Bang & Olufsen MX8000 preset that might get close but it’s off in terms of colours. I intend to improve this situation with the grade shader and LUTs.

Ok so I have some more CRT picture comparisons! I found two better images I’d been sent of a high end Sony PVM 20L4 (an 800TVL display) and the Bang & Olufsen MX8000 (a shadow mask display). I’m going to submit this to Github once I’m done with this post. Last night I submitted a major recfactor of my shader to allow support for lots of different monitor types. You can find all the current presets in HDR and a few I plan to simulate. I’ve got fairly decent photos of a Sony PVM 1910 which is… And made an attempt here

I already had a look at it before I took the shots of Sonic here, and fiddled a bit around, but the phone I’m using is simply too old and the camera not good enough to fit the requirements, you can’t expect any better results than what you’re seeing there with different (also easier to photograph) TV. The Telefunken with the Metal Slug shots here makes a poor target anyway because there’s some color derivation between 50/60 modes even with RGB, I need to do more calibration with service mode eventually.

Fair enough - I was after much closer shots that was mostly all.

The zoom seems useless for this kind of thing on my end, but getting close, this might be better: Maybe useful for something, maybe not. A bit farther away: Yes that close up shot at the top is exactly what I’m after - thanks! Ideally it would be straight on but I’m guessing you might be using an iPhone and it becomes overly bloomy because the ISO is too high. Anyway thanks for doing this the colours in this display are amazing!

@Jamirus What kind of display is that man? I have no words it looks amazing!

That’s a standard Telefunken TV (a Thomson Brand) from around 2000 after adjustments with the FOCUS and SCREEN (G2) pots + what you can do with the remote/service mode.

This is basically a run of the mill slot mask CRT using RGB.

I’m not sure there’s a way to emulate this lower TVL at 4K using subpixel rendering methods, unfortunately

Vertically wouldnt a 8x6 pattern work? I.e 5 pixels then black and the next column across an alternation of that? I’d be more concerned about the width horizontally (that’s quite possibly what you were talking about). We should try it!

@Jamirus Damn man i wish i had a crt tv like that insane quality. I’m more of a slot mask guy over aperture grille. I have a Presentation Monitor which is really high quality but man 240p stuff is just way too sharp on that thing for my tastes, i use it only for 480i/480p stuff which is where that thing really shines for me. Here’s a few pics. Curious to know how many inches on that Telefunken TV that you have. Ha, this TV was close to being dumped and substituted for another run-of the mill one (nothing out of the ordinary near me), cause I was fed up after seeing the smaller ones I acquired and how much better they are, but after adjusting it’s ok. I did have the opportunity to get one of these LG Netee CE-20J3BGX)960×720 68.6 KB
a few months ago, but was thinking it might be somehow out of place in my room. And then I was of course burdend with regret when I was looking again and it wasn’t offered anymore

I understand the point about something that should objectively be of higher quality not being to someones liking though . Taste aside, different displays can serve a specific purpose and be more suited for certain content than another.