Just -L mesen-s works fine. You don’t need the full filename of the DLL or its path. (This feature got added a couple months ago.)

While having the shader support built-in is obviously preferred, you can run many RetroArch shaders (including guest.r’s excellent work) on top of other programs via shaderglass and I know some of libretro’s shaders have been ported to Reshade, as well.

That’s a super neat tool, thanks for sharing (and to the author of shaderglass for creating it).

It could be worthwhile to update guest advanced in the RA repository, such that if shaderglass resyncs it will include guest’s updates from the last 8 months (too many to name

Setting aside any color/brightness issues, can someone please explain to me why this looks so clean? As I understand it, GDV-NTSC is basically just adding NTSC Adaptive to GDV, right?

Why am I having such a hard time getting GDV-NTSC to look similar, with clean edges and natural beam width variation? The white text on the blue background in SMB is killing me.

Megatron NTSC preset with a couple tweaks for 1080p. You can tweak some settings a bit for a sharper look: Setting both main gamma values to 1.0 and using blend mode 2.0 also does a nice job: Greetings. I have been testing up your whole CRT guest advanced progress within the couple of presets you have already available.

I’d like to know it could ever be possible to add up within any of the current presets or a new one that could contain this particular effect known as Rainbow banding that was present on Sega Genesis console games. There’s a thread already talking about this:

For example in that particular reply, there’s a Sega Genesis demostration with RF connection which exposes the colorful red lines coming along with green and blue. The whole thread overall exposes different variants I did over time with public modded versions from mame_hlsl alone or with some few other presets like ntsc adaptive.

Would be great if that particular effect can be applied to other shader/presets that come along with composite-blurry looking just like some of you already have the capability of dithering presence. I unfortunately couldn’t find any other shader/preset that could apply accurately this effect just like it is for the real console.

Not to mention the fact such mame_hlsl preset along with others like tvout-tweak can allow to tweak intensity of the rainbow effect but also how specifically separate are each colorful line from each other, which helps out greatly in accuracy compared to the already existent NTSC shader/presets that to an extent deliver these Rainbow artifacts but in the same time far from being that accurate just like mame_hlsl.

I hope you can reply and thank you a lot for such a great job within your updated shaders.

You can tweak some settings a bit for a sharper look:

you should be able to replace the ntsc-adaptive passes in guest’s presets with the ntsc passes from mame_hlsl with your settings in most cases.

Honestly quiet a few of MAMEs passes can be used with other presets. (At least like 3-4 off the top of my head.)

any ideas ? i may appreciate any preset you could know in how to mix those two passes with:

What settings did you use to produce the first screenshot you posted? What settings did you use to produce the first screenshot you posted?

I used blend mode 2.0 and increased ntsc resolution. The downside is that it doesn’t blend dithering with games which use this technique, but should look very nice with nes… games.

Some posts above i replied that ntsc blending looks better with lower gamma and why 2.0 is defaulted instead of 2.4. Circumstances connected with bloom/glow passes which tend to share the same gamma value are such, that if glow/bloom/halation is used it looks quite different with low gamma. So 2.0 is a compromise, but 1.0 can be used np with presets which don’t rely on some lighting effects.

Is there any reference to the use case/intention of each mask option? Aesthetically I’m fond of mask 1 but I’m not 100% on when to use which options.

masks are currently like WYSWYG and imo it shouldn’t be too hard to pick your fauvorite one or change some options.

Slotmask options are a bit more complicated to describe, it’s desired to match the slotmask width with the used regular mask width and then increase both strength values.

Some parameters are a bit self explaining i guess, don’t be afraid to experiment a bit…

Also note that if you change the “mask shift/stagger” value for a mask, it changes dramatically. For example mask 2 with stagger 1 looks similar to mask 3 with stagger 0, but a bit better for 480p content. My monitor doesn’t like that pattern. The inversion artifacts are the most extreme I’ve ever seen: 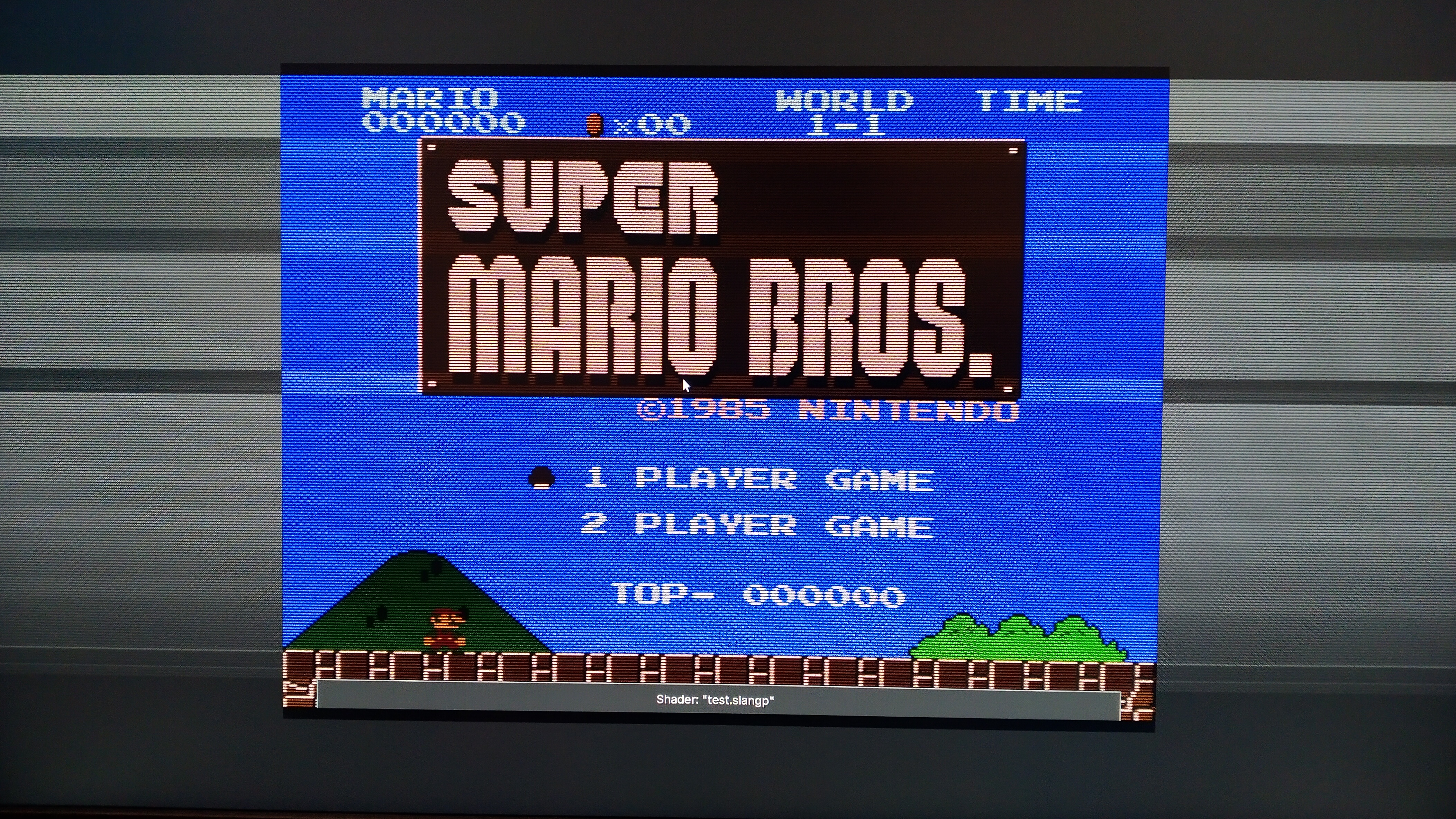 What kind of monitor is that? That’s typically only a problem for very old displays, even a cheap 1080p work monitor shouldn’t have any such problems these days. EDIT okay so this can still be a thing on recent monitors, apparently, particularly the ones that boast 120+ Hz refresh rates.

Probably won’t help, but have you tried flipping the mask?

All LCD monitors have inversion artifacts. There doesn’t exist any LCD panels that don’t have it. What kind of artifacts depends on which inversion scheme the monitor uses. Mine (a 165Hz IPS) just happens to exhibit artifacts with that particular mask pattern, that’s all.

Probably won’t help, but have you tried flipping the mask?

I don’t know what that means

Just saying that the only time I’ve ever encountered anything like that was with a 10+ year old display. Guess I’ve had good luck in that regard.

I don’t know what that means