Let this be a graveyard of my failings. I discovered that the image viewer does not display screenshots in HDR space. HDR games look good at Display:HDR Paper Luminance of 200.

@BendBombBoom great stuff we’re making progress. If you get my latest shader (as of last night) you should see paper white is back in the shader parameters. Be careful with Contrast though as it behaves slightly differently to the one in the menu - it’s an offset from around 5.25 i.e if you set the contrast to 4 in the menu then the contrast in my shader should be set to -1.25.

Also your TV should be able to go higher on a local level I’d set Peak to 1540.

For my shader I’d recommend for your display Is recommend peak 1500, paper white 700+ and then play around with Contrast until it looks right.

Did you not see that I already posted this pattern as well as a close up photo using this pattern? This isn’t a great one to use because it greatly exaggerates the black spaces between triads.

Truly amazing work. I’ve never seen an emulated slot mask look this good. The TVL is almost a perfect match, too. Words can’t capture how good this is.

Edit: what pattern did you wind up using for this?

Yes and does not align well with scanlines. Of course I saw, but I don’t know any shader using that pattern (?). Which shader you know that does that?

For the matter, Lottes already did mask 1 that does that pattern (compressed-for 1440p) with kind of rotated bright “strip” (horizontally while it should be vertical in reality). Except if you want to make LCD look exactly like a CRT, so you would need an 8K monitor at least. Then the monitor just makes all the job for you, having so much space available. No rocket science.

Thanks @Nesguy! I hoped you might like it! I’m pretty excited by this as really it allows me to simulate any CRT pretty accurately on my 4K screen.

So the mask is:

I’ve found some decent photos of a 350TVL PVM1910 I’m going to simulate. Also I’m hoping to get some decent pics of a JVC dot mask monitor.

I plan to create HDR presets of each monitor I can find decent pictures of so if you have any or no anybody with a CRT please point them in the direction of my thread:

As CRT’s are getting older and no new ones are being made, we are left facing a future of these fantastic displays dying out. As people on this forum well know, one avenue to help alleviate this issue is to reproduce them in the digital form. In order to do that we really need close up standardised shots of the CRTs that are still working. This is a call out to everybody who owns a CRT to post photo’s of their displays here so that we can attempt to reproduce them for the future. Instruction…

Technically that is 540 TVL. 2160 / 4 pixels in Y = 540. You have 540 distinct horizontal lines (you divided your Y resolution with the black line times 4. If using Trinitron mask the Y is divided by scanlines effect

Yes I’m aware it’s not exact, I just use typical resolutions of CRTs 600TVL, 800TVL and 1000TVL that I can approximate. However it’s also not true it’s 540 as you aren’t taking into account the slight over draw I have on the y axis due to integer scaling so it’s actually 560.

I also think a lot of CRTs aren’t truly 600TVL as usually there is an overdraw area on them. Back in the day when I developed console games on CRTs you used to have an area that you wouldn’t put critical things in so that users didn’t miss out important stuff like scores or maps. I reckon we’re roughly the same on TVL.

Truly amazing work. I’ve never seen an emulated slot mask look this good. The TVL is almost a perfect match, too. Words can’t capture how good this is.

Edit: what pattern did you wind up using for this?

I second this! Very good job @MajorPainTheCactus! How come no one else came up with these patterns that work so well after all this time? Hopefully this new pattern will be something that can trickle down to other CRT Shaders as well. Right now I’m HDR-Less. Is it possible to use this shader on a non-HDR display that might happen to be bright enough?

I would add that I recently fell in love with the JVC D-Series after seeing some pictures of them in action on Reddit. I tried to get some sort of slot mask working using CRT-Guest-Advanced but the results weren’t quite there yet and I put it on the back burner.

Look out for these JVC D-Series pics at the end of this post. Unfortunately they’re not standardized.

The real deal! CRT Shaders wouldn’t be anywhere today without their ancestors! And here’s another one! 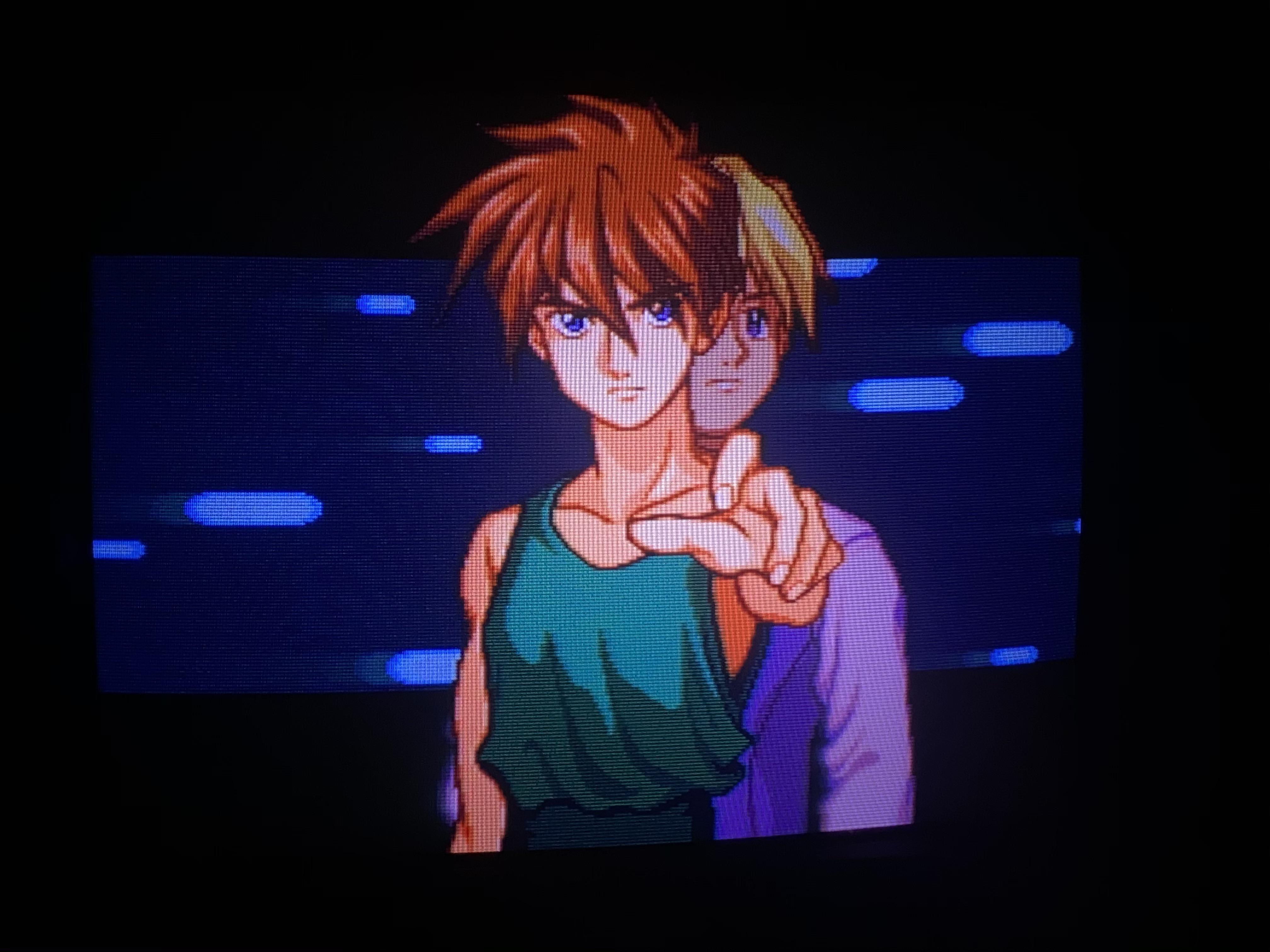 Hi, It’s interesting that you would ask that. Just this morning I was playing around with trying to get the Shadow Mask as well as Slot Mask CRT look for different reasons. I believe the JVCs use Slot Mask, while Shadow Masks are what many computer monitors used. It’s not always that simple to get something that gels together and works properly or even matches the CRT counterparts. I don’t think the technology is quite there yet. There are always some compromises that need to be made especially if you want things to be plug and play and user friendly. Stay tuned!

This zoomed in screenshot is from one of the pics of the JVC AV-32D303 from my earlier post.

Here’s a Trinitron for comparison:

r/crtgaming - Getting the Trinitron dialed in, what next? 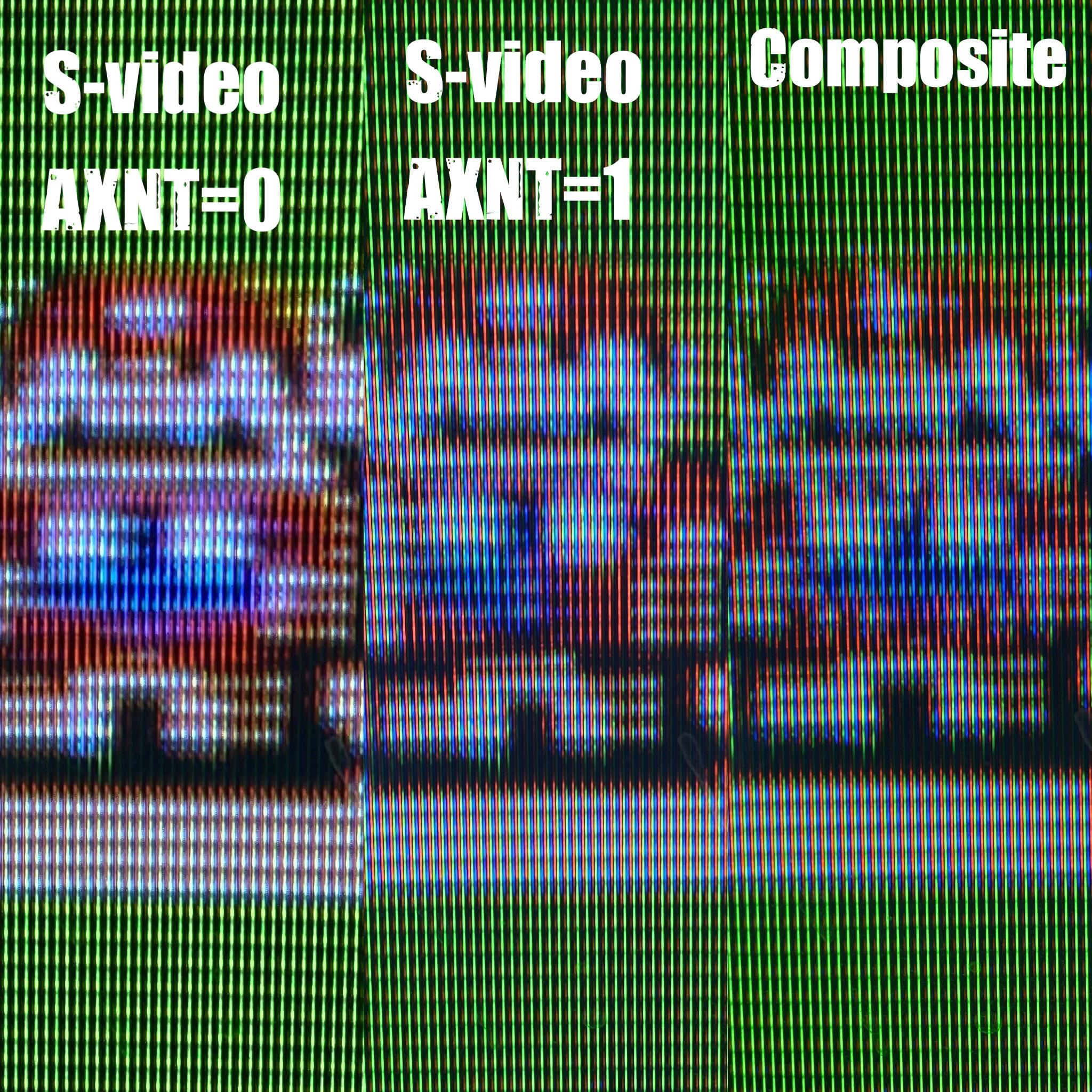 Then I combined it with the shader’s post crt brightness option and got good results. I don’t know the mechanism of that option, but it seems to be clearly different from simple brightness. The picture above is PVM-14L2, and the picture below is my lg monitor.

Wow! I’m completely blown away by this! It’s like we’ve reached!!

Do you mind sharing your colour tweak settings for future reference?

This is nothing short of amazing!!

It should but it is not currently possible. Think about it this way. In order to hit 1000 nits brightness, OLEDs (Like the LG G1) need to put a heatsink on the panel…it’s difficult. HDR just means that the displays allows for high brightness.

Ok so I have some more CRT picture comparisons! I found two better images I’d been sent of a high end Sony PVM 20L4 (an 800TVL display) and the Bang & Olufsen MX8000 (a shadow mask display). I’m going to submit this to Github once I’m done with this post.

Last night I submitted a major recfactor of my shader to allow support for lots of different monitor types. You can find all the current presets in HDR and a few I plan to simulate. I’ve got fairly decent photos of a Sony PVM 1910 which is a fairly low res PVM at 350TVL. I plan to do that next and I’m also looking at photos of the JVC Professional series that use a dot mask.

Anyway here are those photos. Note I’m still a little lower res than the PVM and I’ve fixed the eyes in the MX8000. Also the colours are more off in the MX8000 but I have no idea what is iPhone processing and what is not. As always if anybody have better photos then send them my way. Another few photos as I was testing for submission: Pretty nice! I didn’t even realize this one wasn’t a shot of a crt until I opened the large version and zoomed In a bunch

Thanks for all this @Cyber! I really want to do the JVC stuff the problem is getting decent pictures - everybody seems to take pictures of the games and not pictures of the displays. I’m really keen on seeing a close up of a JVC dot mask display.

As for getting the shader on an SDR display I’m not sure. There are a few displays that get bright enough in SDR so it might work on those but you’d need to disable the HDR10 part. Mind you those displays are capable of HDR so maybe it’s a moot point. You need a displayHDR 600 rated monitor at least.

We’re coming on aren’t we! Glad you like it!

Things are looking much better for me. I’ve found if I set the shader to 8k with 800TVL I get a chunky mask. 4k at 600k makes large gaps and the overall image is darker. The RGB/BGR has no noticeable effect at 8k. Great work on the shader. (Here are phone pics adjusted to show mask breakup.) Interesting you should try going back the 4K 600TVL mask and adjust your paper white up (and play around with Contrast). The one you’ll be using is probably bringing down your TVL to around 430 or something and your QN90A is more than capable of making 600TVL bright enough!

Sadly HDR is a bit like this you need mess around with settings a lot to get the best for your display.

first one looks consumer-grade, although I’m not really sure it’s working as intended anymore because I don’t see RGB stripes in the whites.

When I get time I’ll take some better pictures. I can’t get the contrast where I want and the whites feel muted unless I do 8k at 800TVL. (So many variables it’s bound to be something I’ve got wrong.)

@MajorPainTheCactus I’d be curious to see a picture of the Snes 240p test suite color bars with your setup.

Alright last type of display to try: the shadow mask.

On a 4K screen this has proved the hardest as it kind of falls in between two masks. One mask is too fine and so you can see really see it and the other is quite coarse although I prefer it to the very fine one.

I haven’t even tried to match shape and size of the scanlines on this one - literary first try at getting something roughly right.

Anyway here are the photos let me know what you think? CRT Photo: No idea - off the internet