Hi guys, first post here. In the past I made a shader for FS-UAE (Amiga emulation), but since i found that retroarch has a pretty good support for whdload games, I ported it to slangp so that it can be used with other emulators too.

I’m not that expert with technical terms, but i’m fortunate enough to own an old 15khz slot mask crt monitor inside an arcade cab loaded with Advance mame and other old emulators, so I used it as a reference. Why using a shader, you may ask, instead of the almost “real thing™”?

Actually that thing is big, heavy and power hungry and since it is running on an old AthlonXP i expect it to break sooner or later and i’ll not have spare time to fix, that’s for sure. Also, i’ve finally got an awesome oled 4k tv and i think that with that amazing (low) pixel persistance and resolution, we can get pretty damn close to the “real thing™”

Now i plan to start to work on curvature, but meantime here are some shots from the included presets: Even if I’ve had to look to multiple shaders to understand how glsl first and slang works, I re-used and modified blur(bloom) code from CRT - Guest - Dr.Venom (single pass bloom function) and completely included without modifications Nvidia’s FXAA for antialiasing into its own pass.

Please, tell me what you think, any comment is really appreciated. 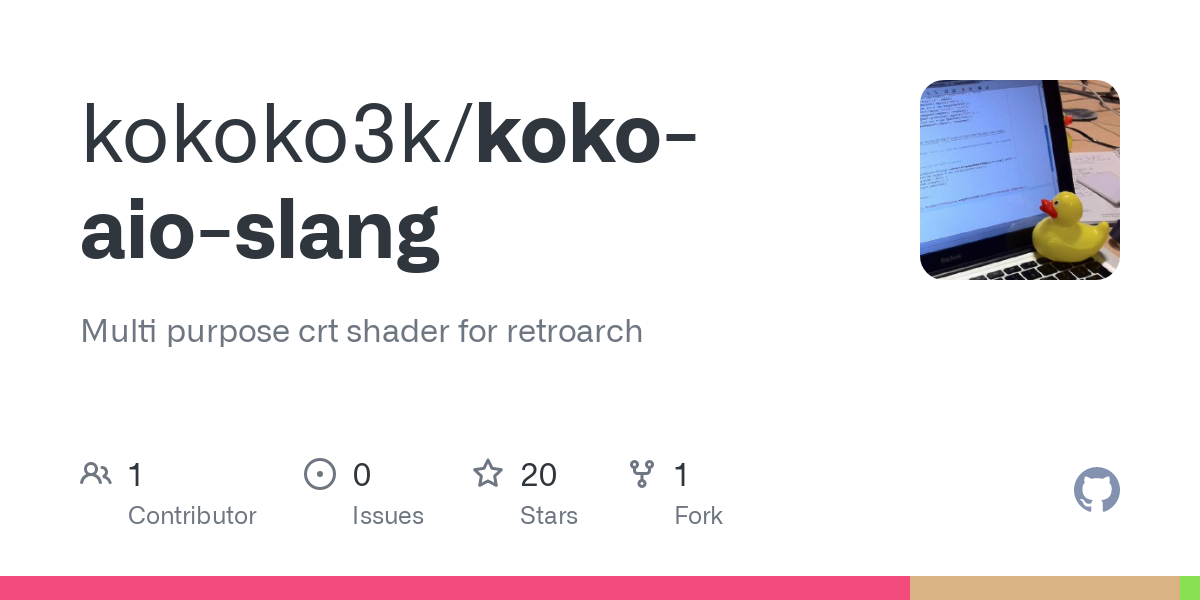 Multi purpose crt shader for retroarch. Contribute to kokoko3k/koko-aio-slang development by creating an account on GitHub.

I tried testing it, but looks like you forgot to add curvature.slang to your repository. Retroarch gives that error.

Yep, sorry, and thanks! Just updated!

Thanks! It worked now! I like your slotmask-bloom preset, using scanlines. Good for my tastes. I’m not very technical about crt shaders, so I just gave a completely subjective opinion.

You can take a look at what I’ve been able to come up with here as well as some other cool CRT Shader projects:

This is what CyberLab Turbo Duo for Blargg + Blargg_NTSC_Turbo_Duo_SNES_PSX_S-Video_CyberLab_Special_Edition looks like today!

This is what CyberLab Genesis for Blargg + Blargg_NTSC_Genesis_S-Video_CyberLab_Special_Edition looks like today!

This is what CyberLab NES for Blargg + Core Blargg NTSC S-Video looks like today!

You can use MPC-HC, MX Player or VLC Player to view the videos.

Here’s a look at my latest preset!

Yeah, I’ve seen your presets, they are great. It seems to me they are targeting 4k resolutions, since you draw the triads horizontal gap too, right?

Do you have any comment or critic specific to work?

Yeah, I’ve seen your presets, they are great.

It seems to me they are targeting 4k resolutions, since you draw the triads horizontal gap too, right?

My presets target 4K mainly but I’ve also tested and optimized presets for 1080p and to a lesser extent 1440p.

Most of them use RGB Mask including at 4K which uses the same mask with a size of 2 which would make it RRGGBB. This is mainly to remain compatible with displays that can’t do RGB Full 4:4:4 at 4K60Hz resolution, like one of my TVs.

However since I realized that in order to get “phosphor” triads to look properly on OLED TVs, I needed to use RRGGBBX mask with reversed Layout, I’ve started to include presets like that for use with OLED TVs.

Do you have any comment or critic specific to work?

I’m not one to be too critical, as I don’t even use a real CRT as a reference. I just tweak until stuff looks good to me and your work looks good!

I would just try to avoid making things even the slightest bit blurry especially when viewed from a distance because it’s tough on my eyes.

Keep up the great work!

With the new update you can now: This is a WIP, you need to set aspect ratio to full in retroarch for the ambient light border to work. Also, the aspect ratio may be wrong in some configurations.

Love what I’m looking at here , great stuff , I was wondering if it was possible to reduce the bloom radius less than 0.5 , Ideally to pixel perfect level ? the bloom can help restore some color but the “fog” bleeding can reduce the vibrance

The image below settings were adjusted to my display saturation ,it might look too saturated For that maybe you can just disable blooming and use ‘halo’ setting?

I may be wrong, but when scaling down using simpler scale#n=, even with bilinear filtering turned on, it seems to just discards whole lines.

Indeed I was in the need of a fast way to get the average luminance of the screen, and just scaling down to a 1x1 textures using absolute scale#n gave me just a pixel, probably from the middle of the texture.

Using mipmapping with a looow precision worked good instead and it gave me the perfect average luminance. This was handy to cheaply detect when a scene change.

The change is available in the latest commit.

Yes, you’re correct. Using the mips is the best way to get a fullscreen average.

Right then, so I need to rethink some other downscaling passes made for (big blurs) bloom and ambient lights itself. Thank you

edit: also, I wonder if downscaling this way is the correct behaviour of retroarch; since specifying bilinear filtering doesn’t change a thing; same very bad quality; It’s more like a decimation filter than a down scaler.

If you set mipmap_input on for a pass it automatically takes a mipmapped version, so smoothed together if the resolution is lower.

I do this in a few passes in the Mega Bezel, an example is below, the first pass is really almost like the stock shader, but it linearize it so the blurs work properly and blend in linear space.

So If i understood properly, this means i just need to set mipmap_input in the slangp preset and then normally use its scaling parameter and normal texture() lookup instead of textureLod() to get the mipmapped texture?

That would be handy!

Yeah that’s what it seems to do, as if it was doing textureLod() and giving the correct mipmap level

Hi there, I just released 3.0 version.

The shader is faster (its gpu usage is under 65% with all of the features enabled on my poor Haswell igpu) and also looks better than ever to me.

The biggest addition is the bezel emulation for which I have to say a big thank you to HSM for allowing me to rip his automagically generated monitor frame to a simple png file.

One thing still missing are presets for HiDPI screens.
If you like how the shader looks @1080p and have some free time, there are several options in the Mask area to hopefully make a preset that looks good with higher resolutions. Running with all bells and whistles and zoomed-in monitor frame Zoomed out and with a background image reacting to ambient light,
cold color temperature A standard Overlay, I just elarged “the hole”
with Gimp to allow the reflections to pass through too,
aperturegrille, shamelessly over-bloomed, because why not? Some relevant changes from the latest releases: